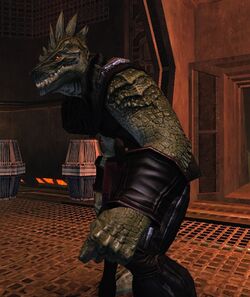 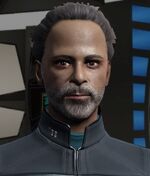 An augmented Human with no physical changes

Augments are genetically enhanced individuals who have had their genes deliberately altered for the purposes of giving them superior physical and/or mental abilities.

Augments vary according to the primary DNA used. They are typically given enhanced strength and often intellect. This can give them a greater stature and combat proficiency but can also lead to them being harder to control as superior ability breeds superior ambition.

Use of augmentation[edit | edit source]

The Federation has outlawed genetic engineering and it has historically been used by the Denobulans. The ban was prompted by humanity's disastrous use of augmentation during the 1990s and the subsequent fall-out that impacted as late as the 23rd century via the crew of the S.S. Botany Bay.

Despite the ban, illegal modification does occur. While it can be successful, though subjects such as Julian Bashir must keep the procedure a secret, others can face psychological damage from the procedure. Such individuals are supported via Project Chrysalis.

In the 25th century, the Federation Science Council has given Julian Bashir permission to test various forms of genetic modification to find treatments for degenerative diseases such as the Irumodic Syndrome.

The Klingons experimented with genetic augmentation in the 22nd century. The experiments led to the Klingon augment virus deforming their appearance. Since then, they avoided the technology until the 25th Century when Amar Singh, a human scientist against the Federation's ban on augmentation, worked with the Klingons on H'atoria to develop Gorn hybrid augments for the Klingon war effort.

Aside from Klingon experiments, the Ferasans (who are part of the Klingon Empire by the 25th century) have been notable users of augmentation for the last 800 years. Their adoption of it led to a split in their race, with Caitians against its use and leaving.

The Dominion rely on genetic engineering for the creation of Jem'Hadar and Vorta. While they are augmented from existing species, they now bear little resemblance to their former selves.

The Suliban used genetic enhancements in the 22nd century as part of the Temporal Cold War, but have ceased the practice by the 25th century.