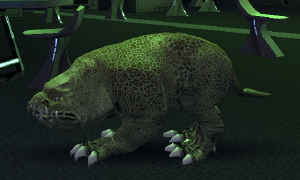 A Saur in a starbase.

A Saur is a reptilian, quadrupedal species domesticated by the Gorn, presumably hailing from a planet of the Gorn Hegemony. Their behaviour and strength is much like other quadrupeds, like Jackal Mastiffs and Warriguls.

In-game, only Attack Saurs have been encountered and only as part of Gorn squadrons, thus their natural habitat is unknown. Attack Saurs are deployed by the Hegemony in semi-arid regions (on Xarantine) and the swamps of Kassae IV. Their successful domestication allows them to live on starships, too, which is required to transport them off-world.

Attack Saurs are commanded by Handlers, very similar to how Targ Handlers control Targs. The existence of an Alpha Saur suggests that Saurs can form packs. Because no wild Saur has been encountered yet, only little is known about their natural behaviour. Gorn use the Attack Saurs for hunting and fighting. Unlike the Targs used by the Klingons, Saurs are relatively slow-moving and easily dispatched before they become much of a threat.