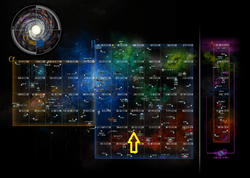 The Archanis System is a system located in the Archanis Sector of the Beta Quadrant and hosts a Space Arena-PvP map.

Archanis is an orange star in Klingon space and home to the colony planet Archanis IV. This world was attacked by Cardassians in the early 24th century. As a result, the Klingon Empire stepped up fleet defenses in the area, so the system is now the site of many battles against the Federation.

Originally a Klingon sector, the Empire relinquished its claims to the entire Archanis Sector to the Federation in the mid- to late 23rd century. During a brief Federation-Klingon War in 2373, the sector, including Archanis IV in the Archanis System, was forcefully retaken by the Klingons. As of 2409, the sector and the system belong to the Empire, but are still a bone of contention between the two powers.