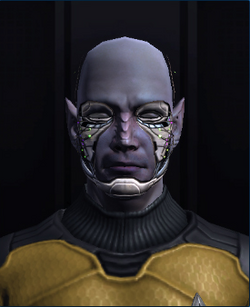 While early Androids were known to the Federation as early as the 23rd Century, it was not until the creation of Data that they became advanced enough to be recognised by some as a sentient lifeform.

By the 2380s, simple androids were commonly employed by the Federation and had become termed Synths by many. For reasons then unknown, Synths launched a deadly attack on Mars on First Contact Day, 2385. This would led to their banning until 2399. By 2409, several Androids now serve in Starfleet and the Klingon Defense Force.

In the Delta Quadrant, two races of Automated Personnel Units were built to fight a war and eventually killed their creators when peace threatened their existence.

Androids come in a variety of humanoid shapes and forms, limited only by the capability of each unit's designer. They can appear totally organic, or completley mechanical. So long as they retain basic humanoid features, they are set apart from other robotic equipment.

Sentient Androids were officially recognized as free-thinking lifeforms in 2365 by Captain Phillipa Louvois of Starfleet's Judge Advocate General's office, who granted such creatures as "having the freedom to choose" when a sentient android (the first to serve in Starfleet) Lieutenant Commander Data's status came into question by the Associate Chair of Robotics at the Daystrom Technological Institute that year. 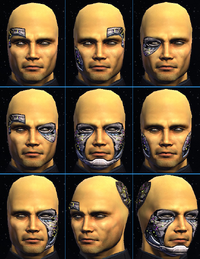 Starfleet and Klingon Empire Android Engineering Bridge Officer Candidates are Very Rare rewards given to players who have a Lifetime Subscription. Unlike other Bridge Officers, they are not tradeable and cannot be sold on the Exchange. They are as customizable as any alien race, but come with nine unique Head Attach Tech options to choose from; each exposing a portion of the character's face to reveal exposed wiring and glowing circuitry.

Android bridge officers come with four traits, two of which are exclusive to the species.