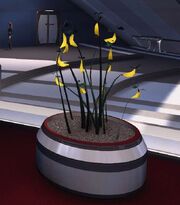 Gelidadium or Andorian Orchids is a genus of 2 Ochidaceae found on Andoria. The name Gelidadium is derived from the latin gelida, meaning 'frozen'. It refers to the fact that Andoria is frozen almost year round.

Two types of Gelidadium can be found on Andoria. The common Gelidadium is found underground in the caves and tunnels of the Zhevra continent. The rarer Aestas Gelidadium will grow briefly along the lakes in the Kathela continent during the summer when temperatures are above freezing.

Little is recorded on the Aestas Gelidadium and it's characteristics, however it is considered to be the fastest growing Orchid known.
The Common Andorian Orchid is more well known and now can even be found off planet in planters and other similar climates. The orchid is characterized by it's long thin stalks and yellow banana-shaped flowers at the ends of the stalks. A small clump of round leaves will often grow on the ends of the flowers.

Both types of Gelidadium beans can be used to create Andorian Vanilla. Natural Andorian Vanilla is extremely difficult to obtain as the Common Gelidadium may only produce a bean once a year per flower. The Aestas Gelidadium produces a higher yield per growth but must be wild harvested.