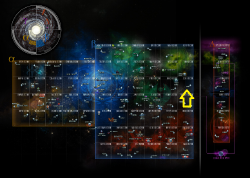 The Alth'ndor System is a system located in the Iconia Sector of the Beta Quadrant.

Alth'ndor III is a ringed, M-class world in orbit of a Class-F star. The planet is home to a thriving agricultural colony that provides needed resources for the Romulan Star Empire. Because of the value of this colony to the Empire, Empress Sela has made protecting the system a high priority. There is a military base in orbit, and plans are underway for the construction of planetary defenses.