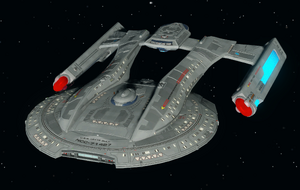 The Federation Akira-class starship is a set of starship classes from the 24th century and redesigns from 2409 onwards.

The Akira continues the design philosophy of the 22nd century NX class and featured prominently during the Battle of Sector 001 and throughout the Dominion War. The Akira's proven effectiveness have led to its current production and to one being always within one light-year of Earth.

See the template to the right for a list of playable starships and NPC mobs in Star Trek Online based on the Akira. Most ships parts from the design variants are interchangeable where the relevant ship has been bought.