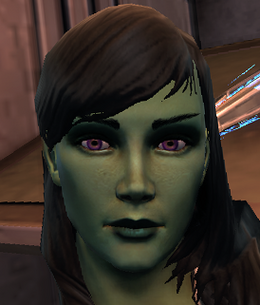 Ahnya-Maahlia was the female Orion dancer at the weapons booth run by Weapons Procurer Urgmaht and Weaponsmaster Targosk on Deep Space 9. She could be seen in the back where the weapons rack is displayed. However, with the Promenade redesign in Victory is Life she was removed from DS9.

While she is a non-interactive NPC, her purpose is obvious: she dances to catch the attention of potential customers as they walk around the Promenade. Little is known about her (she has no character bio). She has, however, an NPC rank of commander with 2047 Hit Points.

She is garbed in an Orion slave girl costume, but also wears thigh-high boots. Her performance consists of the dance emotes available to players (for example, she has been seen performing "The Robot" and "Wave Hands"). She will change her dance style frequently to keep the interest of the onlookers. Occasionally, she will pause to stretch then shake her head, beckon to the people on the Promenade, or simply look up at the ceiling before resuming her dancing.