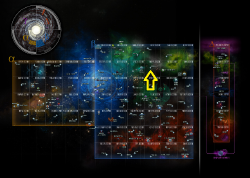 The Agrama System is a system located in the Argama Sector of the Beta Quadrant.

Before the Romulan Star Empire established a presence on Agrama Prime, the system used to be known as hideout and trading post for Orion dealers and smugglers.

For more than a century, the worlds of the Agrama system were havens for the Orion Syndicate. While abandoned pirate bases still remain in the asteroid belts surrounding the three planets of the system, Agrama space is now held in the iron fist of the Romulan Star Empire, which has established a strong presence on Agrama II.