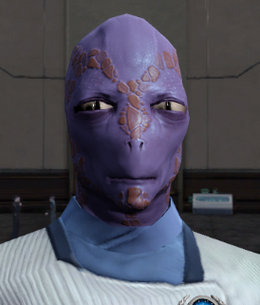 Aennik Okeg is the current President of the United Federation of Planets. He was elected in 2392 and is in his third term as of 2410.

In 2392, Aennik Okeg, who was considered an outside candidate, succeeded Nanietta Bacco as Federation President in a close vote over Jaed Maz of Trill, with Bajoran Shad Ona in third place. Okeg, the first Saurian ever to hold the Federation presidency, began his term by offering Maz and Shad places in his cabinet in an effort to promote unity among supporters of his competitors.

President Okeg's first state trip was to Cestus III, where Federation-moderated talks unsuccessfully attempted to settle the conflict between the Gorn Hegemony and the Klingon Empire. After J'mpok became Chancellor of the Klingon Empire the following year, President Okeg recalled Ambassador Worf to Earth for consultations. A subsequent invitation for J'mpok to a meeting with Okeg was not followed.

In 2395, after the revelation that Starfleet was secretely testing a cloaking device, it took three months for President Okeg to convince the Romulans and the Klingons to send representatives to a summit to discuss the situation. When the meeting finally began, Okeg apologized and said that he had signed an executive order banning all research into or creation of Federation cloaking technology. "The narrow legal view may be that the Treaty of Algeron ended when Romulus was destroyed," Okeg said. "The Romulan Star Empire we knew is gone, and you are a new people. What has not changed is the Federation's commitment to peace."

With President Okeg having been a vivid supporter of the motion, the Federation approves rules for dual citizenship in 2398, thereby boosting Okeg's voter base and ensuring his reelection for a second term. In his re-inauguration speech, Okeg reached out to the Klingon Empire. "We have had our differences, but we are stronger together than apart," Okeg said. "Unity is the honorable path."

When the first links of the Federation transwarp network are opened in 2399, President Okeg remarked that "Planets that were weeks away at warp will be connected in ways they never could be before. When the crew of the U.S.S. Voyager brought this technology back from the Delta Quadrant, they created a world where someday you can have breakfast on Deep Space 9, and be at Cestus III in time to catch an afternoon baseball game."

Later that year, just as Okeg announced plans to travel to Qo'noS for a diplomatic meeting, the I.K.S. Kang brings evidence for an Undine infiltration of the Gorn government to J'mpok. After the Klingon Empire invades Gorn space, J'mpok sent a message to President Okeg, asking for Federation assistance as spelled out in the Khitomer Accords. In response, the Federation Council condemned the invasion, causing the Empire to revoke the Accords. "Chancellor J'mpok's decision is regrettable," Okeg said. "However, it is his to make. We will continue to do all we can to repair our relationship with our longtime friends in the Klingon Empire."

In 2400, after Ambassador Worf's attempts for reconciliation are rejected by the Empire, President Okeg told a reporter from the Federation News Service: "The war is consuming much of the High Council's time. We'll keep extending the hand of friendship. When the time is right, the Klingons will know that we're willing to let whatever bygones there are to be forgotten."

As the tensions with the Klingons heat up when they invoke ancient claims to the Hromi Cluster in 2404, President Aennik Okeg called for calm. "Let's not fight the war before the first shot is fired," Okeg said. "We will explore every option open to us, and peace is of utmost importance." The following year, however, President Okeg informed the Klingon Empire that the Federation will not leave the Hromi Cluster or the sectors surrounding it: "We will continue our explorations of the cluster. We will not uproot Federation settlements that have been in these sectors for decades. You claim you have ancient claims to this region of space. I say that current possession counts for something. We do not want war," Okeg continues. "But we will defend ourselves."

Although he was not able to prevent all out war with the Klingons, early victories as well as the technology and trade agreements with the Ferengi Alliance gave Okeg sufficient political buoyancy to be re-elected for a third term as Federation President in 2405.

In 2406, a plague infected the entire Carnegie population. Although he denied to comment on the possible origin of the plague, Okeg saw to it, that Starfleet got all resources neccessary to treat the infection and enforce a quarantine. The next year, J'mpok rejected a personal plea from President Okeg to resume peace talks. It would not be until 2410, that peace between the Klingon Empire and the Federation is finally restored as both powers face the new Iconian threat. 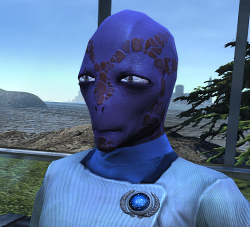