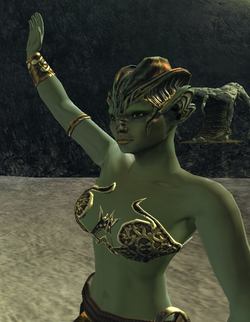 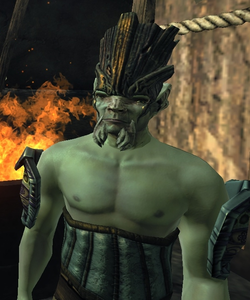 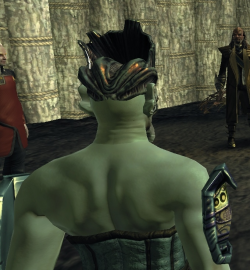 The backside of an Aelasan male.

The Aelasans (also known as Aelaseans) are a humanoid Non-player race native to the planet Aelas IV. They are named after a historical figure, King Aelas, who united his people by transforming them from a technologically advanced civilization to a tribal culture.

Aelasans are a humanoid race. They are differentiated from other species by their pale green skin tone and the comparably large bony structure covering the top and back of their head. The nose features pronounced creases. Male physiognomy differs from the females' facial structure: The osseous helmet also covers the entire forehead and reaches down to the temples at the side of the head. The eyes are comparably small and situated farther apart than in the women's faces. In addition, two pairs of three-fingered tentacles grow downwards from corners of the mouth. The mouth itself is wide and the lips slim. Both sexes have large, dual-pointed ears which appear to be part of the bony head structure. On a female Aelasan's skull this structure is rounded and consist of four pronounced ridges running parallel from the forehead to the neck. Aelasans do not seem to have any hair.

Aelasan follow a tribal hunter-gatherer lifestyle and live in villages. Their buildings are tent-like and consist of wood and leather. Aelasan settlements are protected by copped palisades. The villages and their outposts are connected by plant-free paths. Warriors also work as hunters at the hunting grounds, which can be several miles away from a village. King Aelas is a revered figure and the source of legends derived from past events. He was responsible for the transformation of the technologically advanced society into the modern tribal culture. Aelasans refer to the Klingons as ridged ones. Despite their lifestyle, the Aelasans still possess and use technical devices, such as communicators and historical recordings. They may still have access to other ancient but advanced technologies.

Aelasans have a hierarchical structure. Leader of a tribe is the Elder Chief. This position is hereditary and a female heir is referred to as princess. After Starfleet destroyed the Sky Demon comet, the Aelasans agreed to supply the Federation with topaline. Admiral T'nae even considers future membership in the Federation possible.