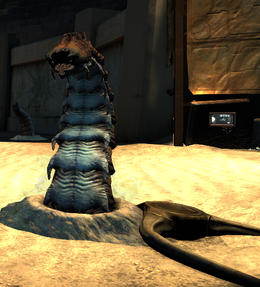 Aehallh worms seem to live in desert and arid habitats. Their place of origin is unknown.

In 2409 a group of these animals was brought to the Nopada System, where they took part in the trials and fights organized by Hakeev and the Iconians. 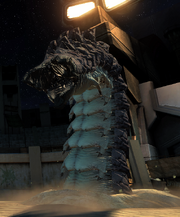 The worms usually live underground. Parts of their body only emerge in order to prey. Once they emerge the worms seem unable to change their location and remain in one spot.

They attack both with their mouth and with acid venom they can expel.

Adult Aehallh worms are already larger than most humanoid species. Elder Worms are giant beasts which prove to be very resistant, even against large scale assaults and disruptor attacks.