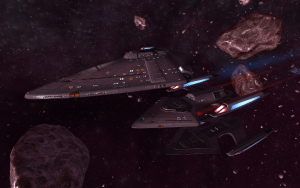 Engaging multi-vector assault mode causes the player's vessel to separate into three smaller vessels, referred to as vectors. The player controls one of the vectors, selected by choosing one of the three space abilities shown below, and the other two become pets. Each pet has different abilities and statistics, and will fight along side the player. The section that you choose to command will retain the weapons you equip on the ship.

There is one ability for each of the three vectors:

Once the vessel has separated, each section has a slant towards either Engineering, Tactical, or Science, and has different statistics, weapons, and abilities when flying autonomously as a pet. 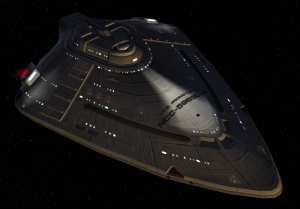 The Alpha section is the saucer section of the ship, and has a bias towards engineering. 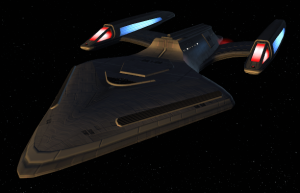 The Beta section is the upper stardrive section of the ship, and has a bias towards tactical. 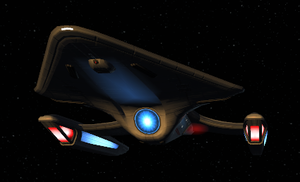 The gamma section is the lower stardrive section of the ship and has a bias towards science.

Multi-Vector Assault Mode was originally developed by Starfleet in the 2370s, being field-tested on the prototype ship USS Prometheus in 2374. Unfortunately, it was considered a failure for a time due to the ease in which the moving parts involved in the Multi-Vector seperation could be damaged and the concept was removed from the Advanced Escort before full production began. However, the design was later revisited and new advances in technology allowed the Multi-Vector Advanced Escort to be created based on the original design.

An interesting legacy of the original USS Prometheus field tests of the Multi-Vector Assault Mode is that during the tests, an attempt was made to capture the ship by the Romulan Star Empire. While the attempt was unsuccessful, enough information was recovered for the Romulans to eventually develop their own Dual Vector Separation technology for the Haakona Advanced Warbird.