This article is about Hangar Pets. For playable shuttles & fighters, see Small Craft. 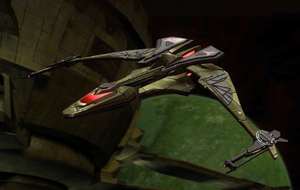 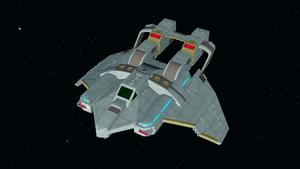 Hangar Pets are small, lightweight vessels that can be deployed from ships with Hangar Bays (such as Carriers, Strike Wing Escorts, Flight Deck Carriers and Dreadnoughts).

Most are extremely agile and can easily outmaneuver any playable vessel. Hangar pets may specialize in direct damage firepower support, repairing the mothership or weakening/disabling enemies. Most direct damage dealing pets have 20km attack range, which is the double of 10km range of most directed energy and projectile starship-mounted weapons. Additionally, while attacking the pets do not prevent the launching starship from using full impulse, thus making it possible to easily outmaneuver even the most agile escort-type foes that have no hangar pets of their own, by keeping them at a distance with their full impulse being disabled under attack.

While they cannot be individually controlled, players can dispatch orders and commands to the wings of hangar pets through the use of carrier commands. Carrier commands are a built-in set of 4 abilities available on any ship capable of deploying hangar pets.

Auto launch can be enabled by right-clicking the icon that launches hangar pets. This will add a green frame and "Autofiring!" text on the launch ability. However, initial launch will have be to manually activated, after which ability becomes automated by deploying new pets when possible.

Squad size refers to the number of hangar pets deployed per wing. Each hangar bay can support up to two deployed wings at the same time.

Carrier commands allow a player to control hangar pets in space. When activated they set the combat of all hangar pets that are currently summoned to either aggressive or defensive, and can make them move out to the currently selected target or back to the player's ship. Carrier commands are not used to summon or unsummon hangar pets (although selecting any command other than "Recall" will launch again any pet that had redocked to the player's ship after spawning).

There are four commands that can be given to hangar pets:

(Sends your craft to attack your currently-selected target)

(Sends your craft to escort your currently-selected ally)

(Orders your craft to return to the hangar and regenerate)

Hangar Pets gain Ranks while active. There are a total of five ranks; each rank-up will improve their performance over time. Each launched fighter gains ranks separately. Ranks are slowly gained based upon the time they spend in combat without dying. Reaching Rank 5 requires a total of 5 minutes of active Combat time, with lower ranks being more quickly achieved than those at the high end.

Each time a hangar pet achieves the next Rank, it gains the following stat buffs:

Hangar pets come with a variety of weapon loadouts, which are listed below. Some utilize beam weapons, others cannons, and a select few mix both types of energy weapons (e.g. Elachi Oschu Shuttles); the energy type generally matches the type used by starships of their faction. Several higher-quality hangar pets gain more weapons above the baseline version, though some do not, instead gaining more abilities. Many hangar pets feature torpedo launcher, or gain one at those higher qualities, and a select few have mine launchers.

Frigates have the largest assortment of weapons, while several support hangar pets have no weapons at all. Squadron pets are actually a single entity that appears to be multiple fighters, and have a large combined weapon loadout to give this appearance, eg. the Tactical Flyer Squadrons have six omni-directional beam arrays in each "group".

It is generally advised to avoid using hangar pets with torpedo launchers on a build utilizing Concentrate Firepower, as the pets will often take the buff for themselves.

One particular quirk about hangar pets is that very few are equipped with Single Cannons (such as the Plesh Brek Frigates), but rather most have a different kind of weapon known as Pulse Cannons instead. Pulse Cannons are exclusive to hangar pets, so the exact stats of these weapons such as their base damage are not known, but they appear to be a 360-degree weapon, like a weaker turret, or some other altered version of a single cannon. Under normal circumstances, they do less damage overall compared to Turrets (though it is not clear if this is a base damage difference or firing arc difference), but under the effect of Superior Area Denial, Pulse Cannons outperform not only Turrets, but even Dual Cannons, though this behavior may be unintentional (i.e. a bug).

For most hangar pets, the higher-quality version replaces any Pulse Cannons with Turrets, though exceptions exist, including Armored Marauding Force shuttles, Bleth Choas Fighters, Orion Interceptors, Stalker Fighters, and S'kul Fighters. There are no hangar pets as of this writing with both a Pulse Cannon and a Turret.

In the Available hangar pets section below, Pulse Cannons are indicated with a Single Cannon icon.

You must own a Carrier, Dreadnought, Strike Wing Escort, Flight Deck Carrier or Multi-Mission Science Vessel in order to use hangar pets. Every new starship with hangar bay comes pre-fitted with a full set of hangar pets. All standard issue hangar pets on new ships are of Rare quality.

Hangar pet performance is affected by various factors, all listed below.