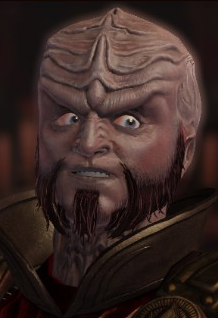 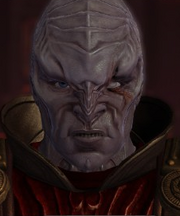 Aakar prior to Season 20

Aakar was a Klingon special forces operative and a member of House Mo'Kai during the 2250s. He was briefly captured by Starfleet forces during the Federation-Klingon War.

In 2256, during the Federation-Klingon War, Aakar led an attack on the Priors System. Using a computer virus masked as a Klingon genetic sequence, Aakar sabotaged the Federation weapon platforms above the planet, turning them on unsuspecting Starfleet ships. In midst of chaos, most of the Starfleet forces in the system were wiped out and Klingons took the planet, butchering the inhabitants and installing large anti-starship missile launchers on the planet's surface.

The U.S.S. Buran led an offensive against Aakar and his forces. The counter-strike was a success and the system was liberated. Aakar himself was captured and placed in custody aboard the Buran.

Aakar would not remain in custody for long. Using the same virus deployed on Priors World defense grid, J'Ula followed a Starfleet vessel to a holding facility in Mandel System and liberated him. Aakar returned to the Priors System and destroyed the Buran, exacting his revenge.

Aakar participated in the attack on Starbase 1, and was swept into the 25th century when J'Ula attempted to use her mycelial weapon. In 2410, Aakar served as J'Ula's First Officer, accompanying her to Qo'noS for the Great Houses meeting. Disobeying her orders, he told the gunman to fire the weapon on the Qu'Vat colony and killed him to avoid being exposed. However, he then betrayed J'Ula and sided with J'mpok, giving the Klingon Chancellor her weapon, which was subsequently used to destroy the Chamber of Alliance on Khitomer.