Excalbian simulacrums of past ships against the rogue Excalbian Borg Queen simulacrum and her fleet.

At the beginning of the year, crew of an Alliance starship was kidnapped by the Excalbians to participate in their trials of good vs evil. An Alliance captain, accompanied by Seven of Nine and a simulacrum of Michael Burnham, was forced to take part in several simulations created by the Excalbians, some of which were based on their own recent missions (such as the bombing of Iconia and battle of Procyon V).

Eventually the trials went sideways, with the "forces of evil", led by the simulated Borg Collective, taking control of the simulations and attempting to take over the Excalbian planet. They were stopped with the help of simulacrums of the famed Federation starships. 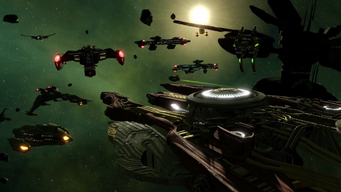 J'Ula's entry into the 25th Century caused a rift within the Klingon Empire over its direction and J'mpok's leadership. Using a little-known Klingon law to reinstate House Mo'Kai, she addressed the High Council and rallied other Klingons to her cause. Following skirmishes at the Great Hall and various systems, J'Ula went back into hiding, but is discovered on Khitomer by an Alliance captain, accompanied by General Martok. Aakar betrays J'Ula and forms an alliance with J'mpok, who then launches a mycelial weapon on Khitomer, damaging its facilities and killing numerous delegates. Fortunately, the Alliance captain, Martok, J'Ula and Adet'pa were able to rescue a few survivors and escape. J'mpok later accuses the Alliance captain for committing the crime, forcing them to go into hiding and allying themselves with House Mo'Kai.

J'mpok began sending various operatives to hunt down the Alliance captain, General Martok, J'Ula and Adet'pa. Some time later, Adet'pa discovered the source of the evidence on J'mpok's attack on Khitomer, prompting them to emerge from hiding. Their presence on Nimbus III and the Gorath System were communicated to J'mpok and he sends forces to engage them. Despite the efforts broadcasting the evidence, the various Klingon Houses lost trust in the Empire and returned to their own homes. J'mpok dismisses the Klingon High Council and proclaims himself 'Emperor' of the Klingon Empire.

The Alliance captain, accompanied by General Martok, Matriach J'Ula and Captain Adet'pa, went on a pilgrimage to Boreth where J'Ula undertakes and experiences various trials and visions. With the aid of Tenavik, they journeyed to Gre'thor to seek out the soul of Chancellor L'Rell to unite the Great Houses. They first landed themselves in Koth where Martok reunites with Gowron, who leads them to the Barge of the Dead and eventually Gre'thor. Before J'Ula could finish her offer, Gowron offered his soul in exchange for L'Rell's to Fek'lhr whom which he accepts, but eventually agreed to J'Ula's new offer of Aakar and J'mpok's souls in exchange for Gowron's freedom. With the rebirth of L'Rell, the Fek'Ihri return to attack Boreth, but are stopped when L'Rell sends a galaxy-wide call aboard her new flagship, uniting Klingons to join the fight and saving Boreth.