2410 is the year in which Star Trek Online´s events following (and including) the mission “Cold Storage” take place.

In June, a Preserver archive is discovered on Lae'nas III during the conflict between the Breen and the Deferi. Deferi and outside scientists begin to study the archive and the Preservers within.

While combating Borg incursions, the Federation, Klingon Empire and Romulan Republic discover that the Borg have been successful in assimilating an Undine. While the spread of this technique is prevented, this leads to them entering Fluidic Space to remove the Borg presence there. While in Fluidic Space, they discover the conflict between them and the Undine is being orchestrated by the Iconians. Fake duplicates of Alpha/Beta Quadrant ships attack Fluidic Space making it appear as though the Federation and other powers are attacking them.

The Federation and Klingon Empire assist the Romulan Republic in establishing their new homeworld on New Romulus. However during their research, and attempts to combat Tholian activity, they uncover an Iconian gateway beneath the surface. The gateway is activated and the actions of the powers inadvertently reactivate the entire Iconian gateway network.

Via a newly revealed ship-sized gateway in the Jouret System, the three powers gain access to the Solanae Dyson Sphere on the edge of the Delta Quadrant. It is discovered that the sphere uses mass amounts of Omega Particles in order to jump anywhere in subspace. The three powers form the Dyson Joint Command to disable the sphere's transwarp capabilities. This however brings them into conflict with the Voth. 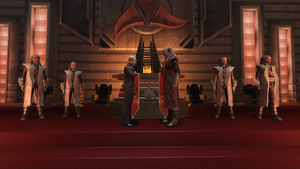 The armistice between the Klingon Empire and the Federation is declared

To resolve the differences between the three powers, and counter the Undine, Rear Admiral Tuvok calls for a summit of Alpha and Beta Quadrant powers in the Jenolan Dyson Sphere. During this summit, the Undine launch an attack on Earth Space Dock and Qo'noS. After Qo'noS is saved by Federation Captain Va'Kel Shon, the three powers celebrate in the First City of Qo'noS. The celebrations are disrupted by the Iconian M'Tara who kills much of the High Council. The Federation and Klingon Empire subsequently agree to a cease-fire, ending the Federation-Klingon War and form the Alliance with the Romulans.

Using the Jenolan Dyson Sphere as their vantage point, the three powers explore the Delta Quadrant. While they identify several friendly and hostile species, they quickly discovered that the Vaadwaur Supremacy has now become a powerful military force. To combat the Vaadwaur's threat to the Quadrant, the three powers form the Delta Alliance with local friendly species.

One notable front is an ongoing campaign on Kobali Prime. During this campaign, it is discovered that high ranking Vaadwaur are being controlled by the Bluegill parasite and are acting as servitors of the Iconians. The Vaadwaur are eventually defeated with the combined aid of the three major powers and their Delta Quadrant allies. 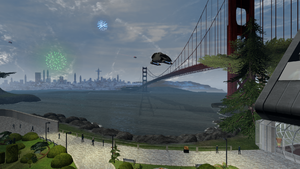 Fireworks over Starfleet Academy as the Iconian War is concluded

Former Empress Sela of the Romulan Star Empire is discovered on an Elachi subspace outpost, having gone missing during the Reman attack on Brea III the year before. She reveals that the Elachi and Solanae serve as respective soldier and scientist castes for the Iconians. She later escapes from Romulan Republic custody and shows the Alpha/Beta Quadrant powers the might of the Iconians and their Herald-elite soldiers, who are gathering within the Andromeda Dyson Sphere.

The Iconian War begins when the Andromeda Dyson Sphere jumps to the Iconia System and the Iconians send their Heralds to attack various locations including New Romulus and Qo'noS. In a desperate attempt to prevent their destruction, the Alliance joins forces with the Krenim. The Krenim build a timeship, the K.I.V. Annorax, in the hopes of changing the timeline to avert the Iconian conflict.

Initial attempts to change the timeline result in the assimilation of Romulus. Attempting to correct the problem, the Alliance restores most of the original timeline but end up wiping out the Tuterians.

The final battle of the Iconian War takes place in the Sol System; the Dominion joins the battle on the side of the Alliance but are unable to turn the tide. The battle buys the Alliance time to send their ship back to before Iconia was destroyed, with the aim of ensuring no Iconians escape. However the Alliance ends up aiding the Iconians and securing their World Heart.

The battle is finally ended after the World Heart is returned to L'Miren. Although T'Ket's bloodlust is not yet satisfied and she disappears, the Iconians then officially end the war on the condition that the other powers of the Milky Way leave the Iconians in peace, who now plan to re-colonize Iconia.

The Alliance negotiates formal peace and the post-war situation

A large-scale invasion of the prime universe in the Badlands led by Mirror Admiral Leeta begins. The Terran Empire, having defeated the Iconians in their dimension, establishes a foothold in the Badlands.

Meanwhile the Alliance makes official first contact with the Lukari when investigating the mysterious dimming of the Lukari System's star. There they come into contact with Kal Dano who uses the Tox Uthat to help the Lukari, but it is subsequently stolen by the Tholians and used against the Na'kuhl. The Na'kuhl become xenophobic and resistant to outside help as their people face the threat of extinction.

The new temporal technology available to the Alliance at the end of the war raises new questions on how it should be used. It also brings the Alliance into the Temporal Cold War where they aid temporal agents from the future in combating the Temporal Liberation Front. The TLF is led by Noye, one of the engineers who build the Annorax and lost his Tuterian wife during the Alliance's first temporal incursion. The Tuterian themselves, hiding in subspace, are joined by the Terrans and Na'kuhl in fighting against the Temporal Accords.

The TLF attack an Alliance Summit held on New Romulus, where they attempt to assassinate President Aennik Okeg and Chancellor J'mpok. The TLF is defeated at the Battle of Procyon V. 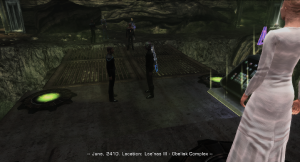