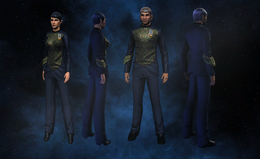 The 23rd Century Vulcan Ambassador Outfit is the outfit worn by Ambassador Sarek during the events of Journey to Babel and “Return to Babel”. It can be purchased from the Zen Store either individually for 550

The 23rd Century Andorian Uniform contains pieces for the upper and lower body. These pieces can be used in Uniform and Off-Duty slots.